In Nahuatl Guatemala means land of many trees and Atitlan means “at the water”. The Quiches of Momostenango call Lake Atitlan the lake of the south, one of four sacred lakes that mark the four sides of their world....

END_OF_DOCUMENT_TOKEN_TO_BE_REPLACED

How to get to Laguna Lodge.
Guatemala is located within Central America. It is bordered on the north and west by Mexico, on the southeast by El Salvador and Honduras, on the northeast by Belize and the Caribbean Sea, and on the south by the Pacific Ocean. Laguna Lodge is 147km west of Guatemala City, approximately two and a half hours away by the pan american highway (CA1). Guatemala City is serviced daily by American Airlines, Delta, United, Continental, Taca, US Airways, Air Canada, China Airlines, British Airways, KLM, Avianca, Spirit or their partners. Arrival airport code is (GUA) Guatemala City Aurora Airport.

The highlands reach temperatures of 30° Celsius. The summer wet months are from May to October. Winter has similar temperatures and is dry season with nights reaching temperatures of around 14°C. The climate is temperate and healthful and of an even spring like warmth with warm days and cool nights. Temperatures are quite constant all year except winter can have some of the hottest and coldest days of the year. The southern wind called Xocomil usually arrives in the late morning and the calm water becomes active with waves. As hot air from the pacific coast rises and cools large voluminous clouds are formed over the volcanoes. The average temperature of the lake water is 18 Celsius or 65 Fahrenheit. 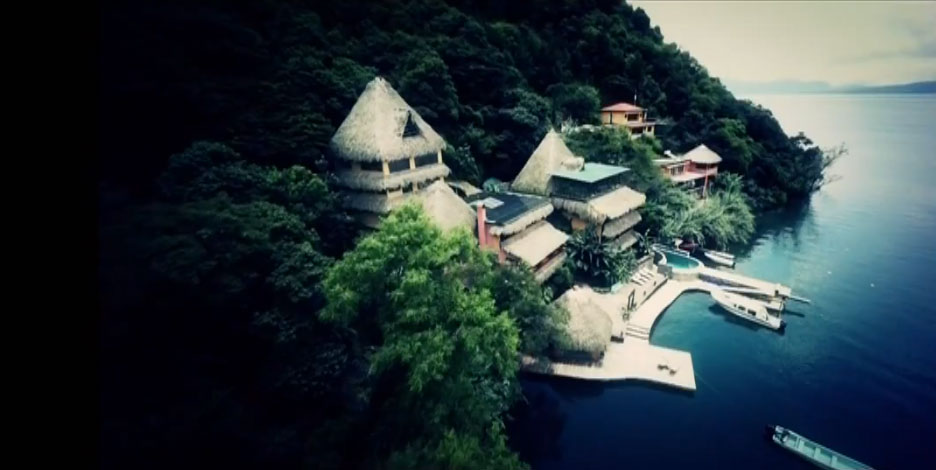 Geography
In Nahuatl Guatemala means land of many trees and Atitlan means “at the water”. The Quiches of Momostenango call Lake Atitlan the lake of the south, one of four sacred lakes that mark the four sides of their world.

Lake Atitlan is 11 miles in diameter, 95 square miles (130 square kilometers) in surface area and over 1000 feet deep. It is framed by volcanoes and escarpments. The lake is approximatly 5,128 feet (1,563) meters above sea level. The Sierra Madre mountain ranges run parallel to the Pacific Coast and are traversed by valleys and tablelands.

The Lake basin is a caldera formed by a large collapse of the central part of a volcano and by huge explosions, the first of which is estimated to have occurred 14 million years ago, the second 9 million years ago, the third approximately 85,000 years ago, which produced the lake as we know it today. Volcanic ash traveled as far as Florida and Ecuador.
San Pedro volcano emerged 25,000 years later, then Toliman and Atitlan in the caldera. The lake is fed by several small rivers and has no surface outlets. Underground fissures and seep holes allow water to filter to two rivers which drain into the Pacific Ocean near San Lucas Toliman along the southern side. 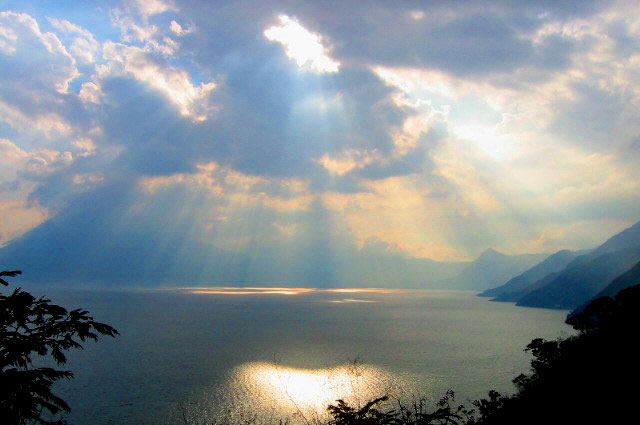 Depending on this activity and rainfall the lake has extremely varying heights. Guatemala has 37 Volcanoes while a few are active most are extinct or dormant. Lake Atitlan is rimmed by Atitlan volcano which reaches 3,537 meters and last erupted in 1853, Toliman at 3,158 meters and is inactive and San Pedro which is 3,020 meters and also inactive. The lake level rises and falls metres over various time intervals. Evidence of human settlements has been found 25 meters under the lake.